Why Trump’s Evangelical Supporters Welcome His Move on Jerusalem

A view of Jerusalem's Old City. President Trump on Wednesday formally recognized Jerusalem as the capital of Israel. AP Photo

President Trump's announcement on Wednesday, Dec. 6 that the U.S. would recognize Jerusalem as the capital of Israel received widespread criticism. Observers quickly recognized the decision as related not so much to national security concerns as to domestic U.S. politics and promises candidate Trump made to his evangelical supporters, who welcomed the announcement..

"Of all the possible theological dog-whistles to his evangelical base, this is the biggest. Trump is reminding them that he is carrying out God's will to these Last Days."

It is true that evangelicals have often noted that their support for Trump is based in their conviction that God can use the unlikeliest of men to enact his will. But how did conservative American Christians become invested in such a fine point of Middle East policy as whether the U.S. Embassy is in Tel Aviv or Jerusalem?

For many of President Trump's evangelical supporters this is a key step in the progression of events leading to the second coming of Jesus. There's an interesting story as to how that came to be.

Ushering in the kingdom of God

The nation of Israel and the role of the city of Jerusalem are central in the "end-times" theology - a form of what is known as "pre-millennialism" - embraced by many American conservative Protestants. ​ 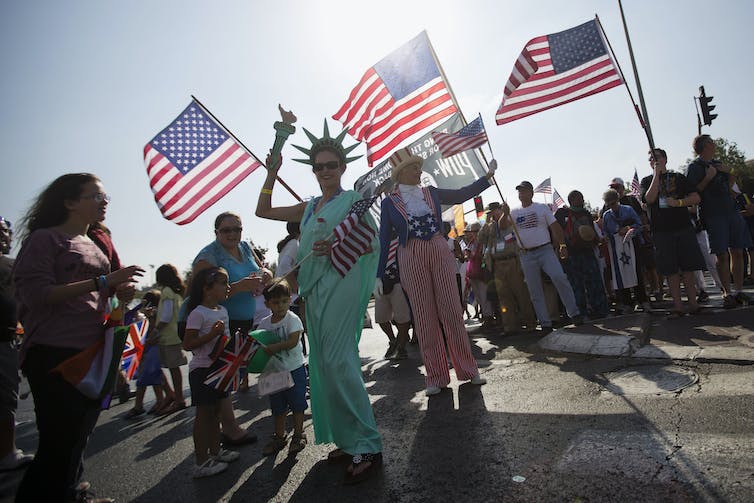 Evangelical Christians from various countries wave flags as they show their support for Israel in Jerusalem in a march held in October 2015. AP Photo/Sebastian Scheiner, File)

While this theology is often thought of as a "literal" reading of the Bible, it's actually a reasonably new interpretation that dates to the 19th century and relates to the work of Bible teacher John Nelson Darby.

According to Darby, for this to happen the Jewish people must have control of Jerusalem and build a third Jewish temple on the site where the first and second temples - destroyed centuries ago by the Babylonians and Romans - once were. In Darby's view this was a necessary precursor to the rapture, when believers would be "taken up" by Christ to escape the worst of the seven-year-period of suffering and turmoil on Earth: the Great Tribulation. This is to be followed by the cosmic battle between good and evil called Armageddon at which Satan will be defeated and Christ will establish his earthly kingdom. All of this became eminently more possible when the modern state of Israel was established in the 1940s.

But to understand the power of this way of looking at the world, it is necessary to do more than point to theological tenets. It is their dissemination through culture that determines which thought systems take hold and which ones are lost to history.

As author of "Building God's Kingdom," I focus on various aspects of conservative American Protestantism in American culture and politics. In my research I have seen how some thought systems get lost in history and others take hold.

Here is what happened with the end-time narrative that made it a core undercurrent to how these Christians look at the world and history.

The origins of this narrative

The end-times framework was popularized in the 1970s with an inexpensive and widely available paperback by evangelist and Christian writer Hal Lindsey called "The Late Great Planet Earth." Lindsey argued that the establishment of the state of Israel in the 1940s set up a chain of events that would lead to Jesus's return.

He calculated a date for that return in the 1980s. Lindsey, like many end-times prognosticators before him, argued that he lived in the "first time in history" when the biblical prophecies could possibly be fulfilled. This, he thought, was due in large part to the reestablishment of Israel.

Despite his claim to be reading the Bible literally, Lindsey's interpretation was far from literal. He said, for example, that the locusts predicted in the one of the plagues in the book of Revelation were "really" helicopters.

As adults were reading Lindsey's book, a generation of young people watched an "evangelistic" film, "A Thief in the Night," in church services and youth group meetings.

Beginning with an ominous ticking clock, the film begins at the rapture. It shows how all the faithful Christians suddenly disappeared. For those who remained, there was one more chance to accept the Gospel but that chance required living through extreme persecution.

The film scared young people into conversion by depicting the experiences of these young Christians who were suffering because they had arrogantly dismissed warnings from their friends, families and churches to repent and had missed the rapture.

According to scholar Amy Frykholm, an estimated 50 million to 300 million people viewed "A Thief in the Night."

The end-times and the culture wars

The use of popular media to spread a terrifying vision of the end of history to draw young people into repentance continued in the 1980s with the apocalyptic novels of Frank Peretti. The Peretti novels depicted a vibrant and active spiritual world in which cosmic forces of good and evil were vying for supremacy all around us.

As the book presented it, every person is obliged to play a part for one side or the other in very literal ways. This applies to all people: "True Christians" were meant to fight on God's side, and the rest on the side of Satan. The first of these was called "This Present Darkness."

Though clearly recognized as fictional, these books were also perceived as "real." For example, while the seat of the diabolical scheming was the fictional local college and the chief antagonist was a fictional professor, it wasn't lost on readers that they were to perceive colleges and professors as likely enemies.

The depiction of literal "good guys" and "bad guys" as regular people aligned with God and Satan, respectively, played into the increasingly divisive culture war battles of the time. These books were powerful and effective until a decade later when they were replaced in popular Christian culture by the "Left Behind" series, co-authored by culture warrior Tim LaHaye.

These 16 books and four films, released over the course of a decade, also trace the lives of the latecoming believers who had missed the rapture and were now part of the "Tribulation Force," as they endured the post rapture world and sought to remain faithful despite persecution. The series' successes included a New York Times best-seller, while seven others set sales records. The entire series sold more than 65 million copies.

It's impossible to overemphasize the effects of this framework on those within the circles of evangelicalism where it is popular. A growing number of young people who have left evangelicalism point to end-times theology as a key component of the subculture they left. They call themselves "exvangelicals" and label teachings like this as abusive.

It's hard to get away from the invocation of mythic narratives in American politics. They get used often and are invented and reinvented to be deployed at different times in history. While supporters and opponents of the Trump announcement agree that the results might be cataclysmic, some of the supporters are happy. That is because they are reading it through a lens that promises the return of Jesus and the establishment of God's kingdom.

Julie Ingersoll is the Professor of Religious Studies at the University of North Florida. This article first appeared in The Conversation.